The Euskadi Cycling was founded thanks to a passionate group of cycling lovers with the goal of promoting not only a sport, but a true lifestyle in the Basque Country. The cycling tradition and proven success that Basque riders have enjoyed have reached the level of a cultural institution. It was clear that it was the right time to come up with long-term plans that would internally produce one of the assets that the region is the proudest to export.

From the community spirit, a social fund was created that would provide the backing and protection for the team and riders; it is a way of giving back to the athletes everything they had given the region. Within this wide description of support for riders and the visibility of cycling, priority was given to the creation of a professional cycling team, made up by athletes born in Álava, Bizkaia, Gipuzkoa and Navarre or who trained in the amateur ranks in these territories. The visibility that this team has acquired in international competitions has served to make Basque sports known around the world.

This privately managed sociocultural organization was founded on June 17, 1993 for the express purpose of "promoting, supporting, popularizing and developing the sport of Basque cycling".

After the start of the Tour in San Sebastián and the experience in the Pyrenees, some higher-ups in the Bizkaia Council began to form the idea of the Foundation. The first steps were taken in February 1993 with the President of the Bizkaia Council, Jose Alberto Pradera, director Juan Carlos Urrutxurtu and Miguel Madariaga. On June 23, the bylaws were signed and in July, on the Feast of San Ignacio, the machine set to work at full steam so that the team could be on the road on January 1. The met their goal. 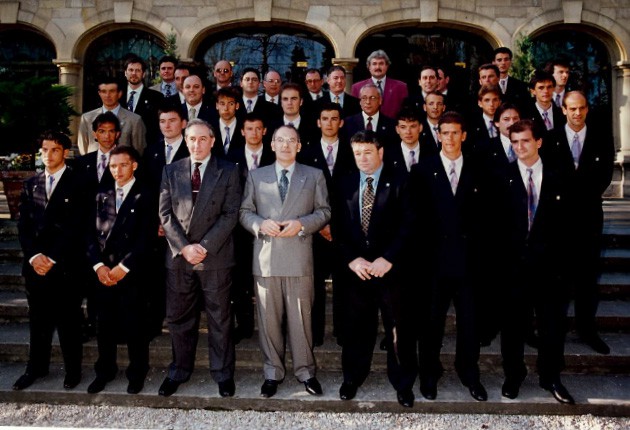 First visit by the Euskadi Foundation to Ajuria Enea, where they were received by Basque President José Antonio.

Complete formation of the first Euskadi team with Roberto Laiseka, Rubén Gorospe and Peio Ruiz Cabestany, among others, with Txomin Perurena and José Luis Laka in the front.

The economic situation during the early years was very delicate. In spite of the fact that there were more than 5000 members involved, the project did not reach the desired level of financial stability. At first it seemed like Petronor was going to provide that budgetary piece of mind, but its support was a one-time offer to 'save' the 1994 year. It wasn’t until the arrival of the Euskaltel S.A. Company in 1997 when the team achieved enough economic strength to begin to grow in a solid manner. The debut of the maillot with the presence of Euskatlel’s 050 in the Vuelta a España in 1997 was the start of a road of constant growth to the top. 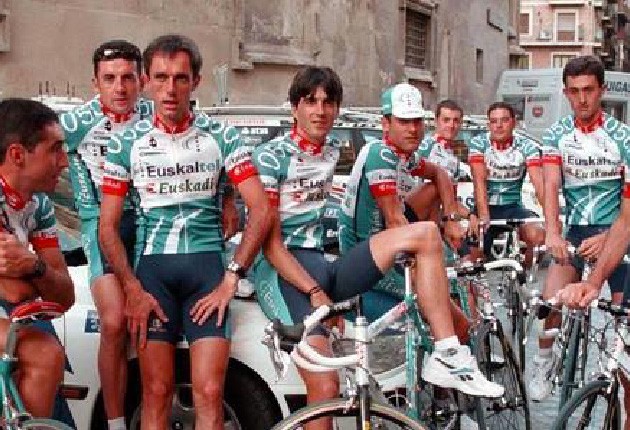 Roberto Laiseka celebrates the first victory of Euskaltel -Euskadi in a grand tour: it was stage 18 of the Vuelta a España, which ended at the Alto de Abantos.

The peak of this unstoppable growth came with the invitation from the Tour de France organization to compete in the 2001 edition. After two season of playing a brilliant role on the French calendar, the organization presided over by Miguel Madariaga saw how their tremendous efforts paid off with their inclusion in the French race, the hallmark of international cycling. The dream of the foundation, to compete in the best race in the world with cyclists born or trained in Euskadi, had come true. And that was not all. Weaving through a sea of orange, Roberto Laiseka came in with an unforgettable victory in Luz Ardiden. In 2003, right in the middle of the 'boom\, Iban Mayo, won at Alpe d'Huez, and Haimar Zubeldia faced off against Lance Armstrong and Jan Ullrich, among others.

Roberto Laiseka wins the stage in the Tour de France, with the finish line on the mythical peak of Luz Ardiden. 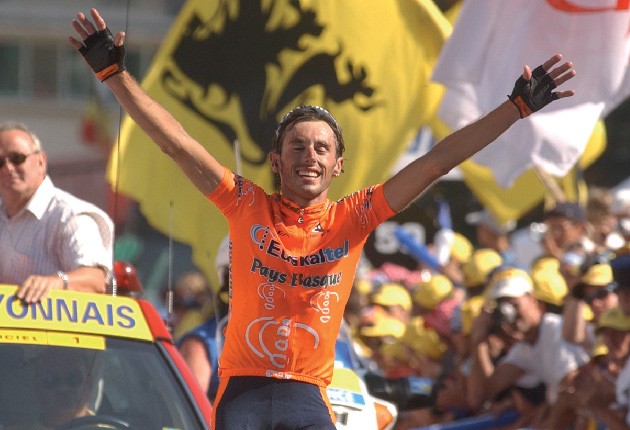 Iban Mayo enjoys his victory in the memorable stage ending at Alpe D’Huez.

Haimar Zubeldia fighting it out with Alexandre Vinokourov, Lance Armstrong and Jan Ullrich in the 2003 Tour de France.

Antxon Luengo began in the ranks of Euskaltel-Euskadi in 2004 and remained on the team until 2008.

Orbea Continental was created in 2005. That year was the first of the World Tour, and one of the goals of that new league was to promote grassroots cycling. To do this, it was necessary to have a 'reserve' team or one closely linked to the structure of the top category. The Orbea Olarra 2004 amateur team became the Orbea Continental team in 2005. The step up from the amateur level to the World Tour was huge and that team served a very, very important function. Cyclists who today shine with their own light, like Mikel Landa, Mikel Nieve and Jonathan Castroviejo were forged in that group, from whose ranks also emerged Romain Sicard, winner of the Tour del Porvenir and Sub23 World Champion, to name just a few of their achievements.

Presentation of the Euskaltel-Euskadi team at the Ficoba building in Irún.

Iñaki Isasi in the Vuelta a España.

Roberto Laiseka at the Giro de Italia, accompanied by Jens Voight. This was the Gernika cyclist’s last year as a professional; he began in 1994 and remained on the elite squad until 2006.

Podium of the 2007 Tour de France, in which Amets Txurruka wore the white maillot that recognizes him as the most promising young rider in the competition. It was the first time that Euskaltel-Euskadi had a cyclist on the podium of the Tour.

Samuel Sánchez finishes the 2007 Vuelta a España, completing the podium he shared with Denis Menshov and Carlos Sastre. It was the first time that Euskaltel.-Euskadi climbed the podium in the general rankings of the Vuelta.

Jon Odriozola with Unai Etxebarria at the Challenge Ciclista a Mallorca.

Samuel was declared the king of the mountains in that unforgettable Tour de France.

2012 was a special year in the life of the Euskadi Cycling Foundation. With its sights set on 2013, the professional team broke away from the Foundation to be managed by Euskaltel, S.A. Through a company called Basque Cycling Pro Team. This new team, with the aim of certifying its tenure in the top cycling category, hired cyclists who did not meet the requirements of the philosophy in place since 1994, but who contributed points to ensure an elite position. In 2013, the Euskaltel Euskadi team closed its doors.

Mikel Landa being interviewed by Juan Mari Guajardo, while Miguel Induráin looks on at the Gran Prix that bears his name.

Victory of Samuel Sánchez at the Volta a Catalunya.

Meanwhile, the Foundation continued for two more years with a continental team and another sub23 team until reaching the decision to opt for a powerful combination in the sub23 elite category. A leader for the last three years in the amateur peloton, the Foundation team has finished exceptional seasons in the category, forming a broad group of cyclists who aspire to professional levels.

Mikel Aristi roars across the finish line in first place at Laukiz. 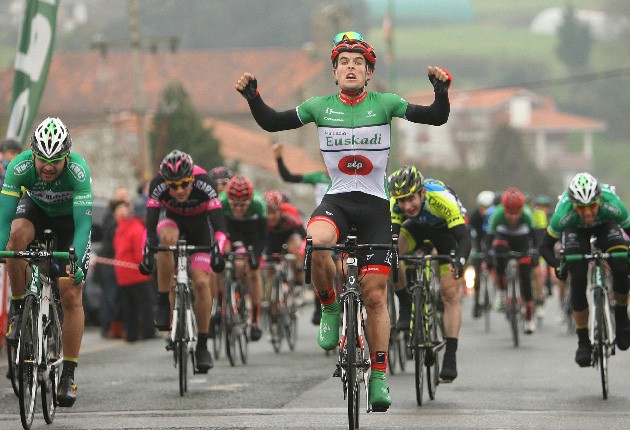 Gotzon Martín sprints ahead in the leader’s maillot, flanked by Mikel Alonso and Cyril Barthe. 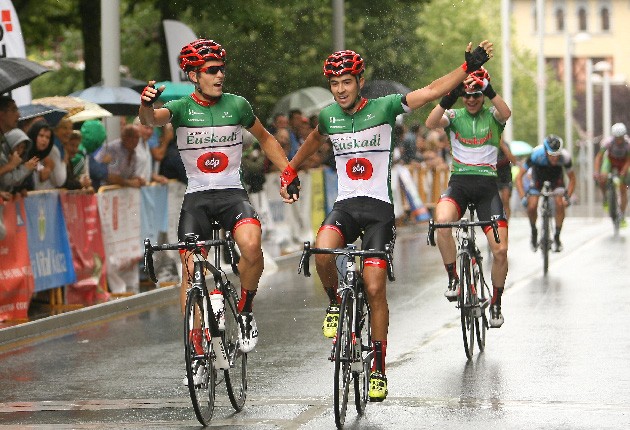 Mikel Aristi, Javi Martín and Ion Irisarri celebrate the victory together at the Critérium de Verano, held in Amurrio. 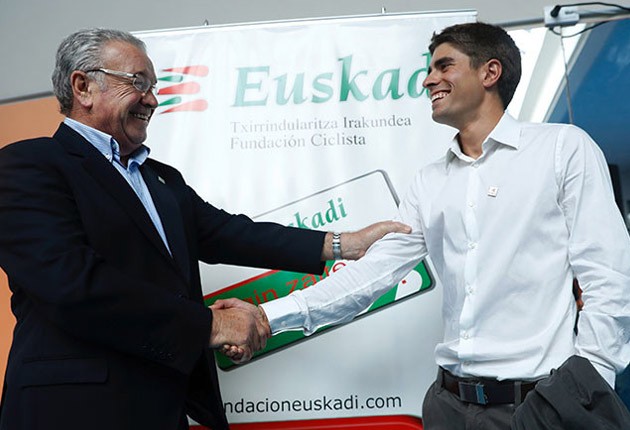 Miguel Madariaga and Mikel Landa seal the transfer of the presidency of the Euskadi Foundation from the first to the second in line, with the unconditional support of Orbea and Etxeondo.

The new Fundación Euskadi team that debuts in the professional category in 2018, with the enthusiasm and the goal of soon being in the world’s best cycling races.